A Call For Creative Invention

Filmmakers Alliance is about to launch a crowdfunding campaign so I'm working an an accompanying video that will include clips of great independent films. As I was considering which films to include, I noticed I had a decided preference for earlier work over more recent films.

Then, last night at our Echo Park Film Center screening of short films, I found what impressed me most about the films we selected was the amount of formal experimentation/invention that was in evidence in most of the films. And so it then dawned on me that my response to - actually, my hunger for - creative invention was also behind my preference for older indie films.

As I tracked back through the years looking at indie films, I noticed a distinct decline in the amount of creative risk-taking in the breakout, award-winning or otherwise popular indie films. Now, this may be less a comment on the types of films that filmmakers are willing to make than it is a comment on the types of films that get recognition, show at festivals and/or manage to acquire some type of distribution. I simply may be missing a lot of innovative filmmaking simply because the films are inaccessible to me. But I doubt it. I know enough people in the filmmaking universe to know if a truly distinct film is floating around out there. So, although I suspect this creative timidity is, nonetheless, the result of a few different forces working in unison, I am going to address the contribution (or lack thereof) made by my community - filmmakers.

I don't have to see every film at every festival to know that filmmakers almost always "play it safe". And when they do choose to take risks, they often do it recklessly - without proper preparation. I often hear filmmakers say they want to make the kind of films that made a creative impression on them - which typically means they want to mimic the style and structure of films that have been around (and been mimicked by others) for many years. It's rare to find filmmakers who are excited about using cinema to communicate their own distinct perspective on the world - how they tell stories, how they see things, how they hear things. We all do each of those things differently. But some of us just don't know it. Or, we know it, but have difficulty celebrating it or accessing it creatively. We are content to be impressed by other people's distinctiveness and then try to replicate it in our own filmmaking. This is actually not a bad way to go as you are developing your creative muscles and exploring your own cinematic voice - as long as you are being ambitious in selecting your cinematic models. But it's important to be cognizant of where another filmmaker's voice ends and yours begins. At some point, you have to distinguish yourself from what has come before by expressing who you are now.

Why is any of this important? I've asked and answered this question before but I feel it needs to be constantly and vigilantly asked and answered. When you have those weak moments when you just want to "get through the day" creatively or when you feel this or that frame of film is "not so important", you can remind and re-energize yourself with this answer: your films are your life legacy. Like it our not, anything we create that won't be immediately destroyed (such as a sandcastle), is our legacy - creative and otherwise. Most art lives long after the artist is gone and defines them on many different levels. If you are content to create a legacy of telling stories - even very good stories - in a way that has been told by others thousands of times before, then this call for creative invention is not meant for you. But if you want a legacy of making films that explore all of the unique properties of cinema employed in service of your distinctive creative vision, then you need to answer this call.

Also, from a "make a living" perspective, creative experimentation/invention is important if you envy the career of a David Lynch or Jim Jarmusch or Todd Haynes or even a David Fincher. To get there, you have to take risks. In today's tough times, just being "good" is not good enough. You need to be uniquely good. If you aren't a skilled hustler (as many filmmakers are), then you need something else to distinguish you from the pack. And if you are truly a filmmaker, that "something else" should be evident in your work. 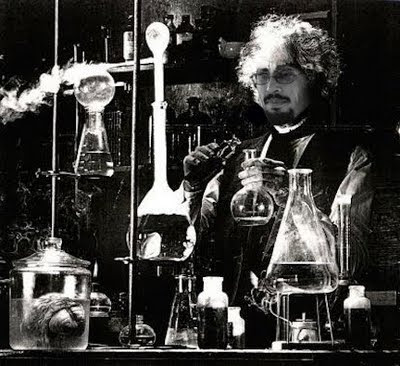 How does one creatively invent? How does one find their unique cinematic voice? And how does one do any of that stuff successfully (without producing a creative trainwreck)? Well, I've blogged on this, too, in the past, but again, they are questions that can be asked and answered over and over. At the risk of repeating myself, here are just a few general guidelines to follow:

So, if you are conceiving a film and have been compelled to read this far, then please answer the call for creative invention. The risk is it's own reward. And your distinctive creative energy will be a legacy not soon forgotten or ignored.